For those who have never been to Buenos Aires before, this will give you a little background.  It has been called the “Paris of the South” and with good reason.

So come along for this introductory part of the expedition.

Next we have a look at the Plaza Hotel – once the finest hotel in all South America and today, still one of the most magnificent.  When I was there in 2015 I found the manager and explained who I was and what I was researching.  Senora Rodriguez was pleasant and helpful.  I told her that my research indicated that Martin Bormann lived in this hotel for a few years after the war – with two young women.  Without batting an eye, she said:
“Yes.  In room 740, the Presidential Suite.  He lived here for some years but I don’t know anything about the young women.”

They all knew about Bormann living there after the war!  I asked why this information was not in the brochure about the hotel and she said that this was not the kind of publicity they wanted.  Following are some photos of this magnificent hotel.

The next day I had an interview with a production studio that was filming a series about the German U-Boats in Argentina waters.  It was very interesting and when it airs, we will let you know.

Now I visit a historic restaurant, not far from my hotel.  This was a favorite meeting spot for Mengele, Eichmann and many others of the escaped men of the 3rd Reich.  The history, the intrigue fairly jumps off the walls at you.  Enjoy a meal there and let your mind wander back seven decades.

The walls are adorned with the coats of arms of many German cities and sections.  Take a look at what they saw some seven decades ago and what we see whenever we are in Buenos Aires. 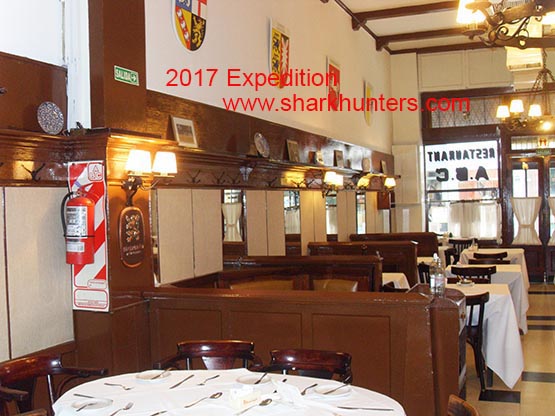 Look on the walls – they all there.  Who else looked on these pictures?