Sharkhunters President HARRY COOPER 1-LIFE-1983 spent most of the month of June 2018 on expedition in Argentina
We met with old friends and met new friends alike, and all the while learning true and honest history.  Join us in our photos as we walk in the footsteps of history.

Day 1 was the usual scramble to get to the airport then to fly out, only this time it did not work out so well.  Delta had cancelled the flight from Atlanta to Buenos Aires, but they said they would put me in a hotel and furnish me with a nice dinner.  HA!  Below are the photos of the Delta Customer “Service” area where more than 100 unhappy people tried to get answers to the problems that Delta had handed them…..only two people manned the desks.

Not much happened on Day 2 except a long, smooth and boring flight to Buenos Aires – the best kind of a flight.  It was late in the day when I arrived at the Argentina Navy Hotel – but my suitcase was still in Atlanta.  Pity anyone downwind of me but as Scarlett O’Hara said as her final line in Gone with the Wind…”Tomorrow is another day“.

Getting our wheels on the ground and getting our ducks in a row, so it is another quiet day – while I wait for Delta to get my baggage to the Navy Hotel so I can shave and change clothes.

I was interviewed in Buenos Aires for a TV show and the topic was – what happened to ARA SAN JUAN, the Argentine submarine that disappeared in the open ocean some months ago.  In Argentina, there is much more furor about this tragic situation than we get in the northern hemisphere.  There is finger pointing everywhere but the bottom line is that there is no definitive proof for the cause of the loss.  There is a strong rumor on the street that a Royal Navy submarine was trailing SAN JUAN then torpedoed it.  This is absolutely crazy with absolutely no basis in fact, but a lot of people there believe it.

The report of two malfunctioning battery cells points the finger in another direction plus the report that the seal around the snorkel was leaking and allowed a large amount of sea water to get into the battery area.  This was a very old submarine and judging from my visits there, the repair and maintenance facilities were not the best.  The best guess so far is that there was a large amount of gas created and an explosion occurred but there is still no reason – not even a guess as to why the boat dived once the problem was detected.  If there is a problem aboard a submarine that cannot be easily rectified while the boat is surfaced during peacetime, there is no reason the boat should be dived.  In a worst-case scenario, the boat would remain on the surface while an SOS is sent out.  Why SAN JUAN dived will probably never be known.

Now starts the finger-pointing.  Depending on who one talks with – it is the Argentine Government’s fault for not providing enough money; or it is the shipyard’s fault for not maintaining the boat properly; or it is the fault of the Skipper for diving the boat; or it is the fault of the Argentine Navy for…..we don’t know, but everyone is pointing fingers at someone else.  Since the Russian salvage group has halted their effort to find ARA SAN JUAN, it is unlikely the real cause of this tragedy will ever be learned but as a dad who lost a son, I can tell you that there is nothing that will take away the anguish or the incredible pain – and so the grief fueled finger pointing continues.

Now we get rolling!  Early morning taxi to Aeroparque and off to San Carlos di Bariloche!  Checked in at the familiar Hotel Islas Malvinas, also operated by the Argentine Navy.  Once checked in, we walked all over town visiting places important to the people of the 3rd Reich who lived there.

Today we start rolling in earnest in this land of mystery.  Let’s first get a glimpse of the beauty of this area and a quick interview with a high-level person of the Argentine military who was visiting Argentine military facilities around the country.

It was a revealing conversation in a couple ways.First – it was revealing that the Argentine Government loved Donald Trump. The government official said so and as they left the hotel, she turned back and yelled; “Make America great again!” It was also revealing that there is only ONE woman in this photo. When we finished shooting, I said: “Thanks for your time, girls.”
…to which one replied – in a deep baritone voice; “Yah; right pal!“Okay, so I live and learn…

The next series of photos is to not only show the incredible beauty of this land, but more important to show how easy it was for Adolf Hitler and so many others to disappear so completely in this vast wilderness some 800 or so miles southwest of Buenos Aires.  This area is still remote today but let your imagination slide back some seven decades – it was virtually as if on another planet.  There were no airports (only one within a few hundred miles today); no decent roads (only one paved road in this area today) and no railroads.  The only way in or out was on an old dirt road or by seaplane.  As you look at these photos, try to let your mind wander back some 75 years.

Now we zero in on one of the major objectives of this expedition – the Saracen Tower!  This was built at the same time as Inalco by the same architect and that was in the closing moments of the Second World War.  Due to its position on a strategic point of land on this massive lake, it makes a great observation point on this huge lake to warn those at Inalco of any approaching boat traffic heading their way.  Remember – back then, this area was next to uninhabited and so any boat heading toward Inalco and Adolf Hitler was suspicious.Even today, access by land is tenuous at best.  We had to drive down dirt roads that were as full of potholes, lumps and bumps as the Dan Ryan Expressway back in Chicago after a winter thaw.  On top of the unfriendly road, it was difficult to determine where we should be going but finally we arrived at the locked gate and we could see the tower about 100 yards ahead.  There was one of those signs on the gate that said “No Pasar” which we know means we are welcome – the same as ‘Eingang Verboten‘ in Germany, so over the fence we went.  We passed a handful of workers who had been clearing and burning brush and they told us where to find the caretaker since the owners were not there.We found the caretaker and two big dogs at the rear of the manor house…..and the guard dogs nearly licked me to death.  They wanted to play and had a couple soccer balls on the lawn so while Martin kept the caretaker busy with pointless talk, I played kick-ball with the dogs but each time I kicked the ball, it just happened to go closer and closer to the tower that sits on a bluff over the lake.  Only to maintain my balance mind you, I had a video camera running in my left hand and a photo camera snapping away in my right hand while I kicked the ball ever closer to the tower on the beautifully manicured lawn. 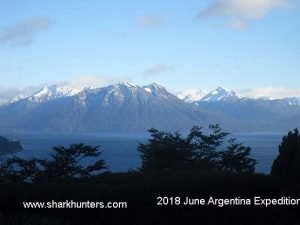 These five photos were all shot on an Argentine Air Force R & R area where officers could take their families for a vacation and the cost, if there was any, was very inexpensive.

As already stated, the beauty of this area cannot be overstated and try to imagine how remote this area was in 1945.  It might as well have been the dark side of the moon for its inaccessibility.

Keep in mind that this area was “discovered” by Oberleutnant zur See Wilhelm Canaris in 1915!  He later became a full admiral and head of the Abwehr, the German Secret Service.  In 1944 Großadmiral Karl Dönitz said that the German Navy had found ‘an impregnable Shangri La for the Führer.‘  We are quite certain that this area is exactly what he meant.

The photo on the right is as close as I was able to get; about 30 feet from the tower, when the caretaker got wise to my game of kick-ball with the guard dogs and he angrily told Martin that we had to leave. He told Martin; “Do not cause me to become me a violent man! “Okay, we sure didn’t want it on our conscience that we had made him a violent man,so we said our thanks and left.Check our YouTube channel for the video of the tower; we think some of the best video anywhere of this unique and historic place. We have not seen any photos or videos of this tower that were shot this close.

PS:  The woman on the right in the blue sweater and grey jacket was the only woman in that photo top of the page.