We did a lot – saw a lot, went many places …and walked from 5 to 10 kilometers each day. Join us on these pages and hopefully next year, you will join us in person in 2013. As we said – some of these places will be dropped from our 2013 Berlin Patrol for obvious reasons.

Our first stop was Cecilianhof. This was the residence of the Crown Prince in Potsdam and for this reason, the victorious Allies chose this to be the site of the famous Potsdam Conference where the “Big Three” carved up the German lands. As history tells us, France was not invited.

The red star was planted by the Soviets in 1945 because this area was in their part of Berlin. It is continued to this day because of its ‘historical significance’. It is always well maintained and well cared for.

Do you remember back in the days of the Cold War when some American or British businessman was grabbed by the KGB in East Berlin and charged with spying? We all thought this was trumped up, that these businessmen were just being used as trading pieces so the Soviets could get back some of their own spies. As we personally learned later, this was not the situation and in most cases, the businessmen were in fact, just businessmen but they had been contacted by the CIA to take photos of – whatever the CIA wanted them to take photos of. They were not true spies, but they were spying and being untrained as spies, they were often caught taking photos of sensitive things.

The Klein Glienicker Leisure Garden (with flower garden) is regarded as the earliest, most important example of a classical landscape garden in Prussia. Peter Joseph Lennè determined the design for its owner, the Elector Karl August von Hardenberg as early as 1816. After its acquisition by Prince Carl of Prussia, the son of King Wilhelm III, a working relationship between Peter Joseph Lennè and Prince Carl began with the goal of creating a landscape park according to an English model. This relationship would last for decades. In 1824, Karl Friedrich Schinkel began converting the old billiard house into a casino; reconstruction of the castle into a Classic design began one year later under his supervision. The Leisure Garden was completed to the highest artistic degree by installing and converting park structures, through ever richer ornamentation with imported woods, exotic plants, as well as valuable works of art, fountains, and pergola.

We drove on to the “Wansee Haus” and we visit for the beauty of the place. You may read anything else you want into this visit.

Now, just for fun, let’s walk along the Autobahn – watch out for fast moving cars!

Not much remains of this former DDR restaurant on the former East Berlin side of the border …only rubble and memories of a time that passed into history a long time ago – but was it really that long ago?

How much of this history is disappearing right before our eyes? How much will be gone in a year? Two years? Will YOU be with us to experience this history yourself? Don’t put it off …it may be too late.

Okay, we have had enough fun for one day – it is time for Abbendessen – supper, and we go to a beautiful German restaurant in the old hunting lodge style right on the banks of the Teltow Canal, by the locks (Schluse in German).

Sunday 2 September …a bunker that calls us to explore. What is beyond this door? Not only a bunker, but much more in Berlin just waiting for the Sharkhunters.

We did a lot – saw a lot, went many places …and walked from 5 to 10 kilometers each day. Join us on these pages and hopefully next year, you will join us in person in 2013. Don’t put it off year after year.

Our first stop is at the former home of the Pioneer Division and their bunker, which stands like a silent sentry to past history…

We depart this place with memories and photos – we walked in the footsteps of history and we are now off to Karlshorst. It was in this Berlin mansion where top-ranking officers of the various branches of the Wehrmacht sighed the German surrender.

Today is COOPER‘s birthday! Sure is an unusual way to spend one’s birthday – sitting on a Stalin Pipe Organ in Berlin

…on into the Zentrum of this vibrant city

There were several Flakturms like this around Berlin to shoot down Allied bombers. They were built very high in the air and at the top there was a battery of the famed German 88’s, the 88mm anti-aircraft gun that was so accurate that more Allied bombers were shot down by AA than by Luftwaffe fighters. In addition to the 88mm guns, they had an array of 37mm and 20mm guns as well.

Monday 3 September …the “Love Nest” of Dr. Josef Goebbels; the sunken barracks of the Soviet Kampfgrüppe; the man-made lakes on the property of the headquarters of Großadmiral Karl Dönitz; the above-ground bunker compound of the Kriegsmarine Headquarters; the deep underground bunker for Dönitz; and the house in which he lived.

What is beyond this gate with that nasty sign that says “Eingang Verboten“? As we know, that translates to “Sharkhunters are Welcome Here!“. Walk through this gate with us and see history not available to others.

We did a lot – saw a lot, went many places …and walked from 5 to 10 kilometers each day. Join us on these pages and hopefully next year, you will join us in person in 2013.

We first come upon the wing (photos above) where Goebbels would review the newsreel footage and decide what could be shown to the German public and what could not, especially as the war was turning against Germany. It was also in this wing that Goebbels ‘entertained‘ and ‘interviewed‘ aspiring starlets.

We have spent time here at Haus Bogensee and we are now on the march (a couple hundred meters) to the area where the Soviet buildings are. This was a Soviet version of the Hitler Youth with dormitories for those attending the re-education, and there are massive buildings for the meetings and a parade ground. Come along – but watch your step.

Memories of a collapsed Empire
The Soviet Union lived only some decades – a short time in history when compared with the United States, Great Britain, the Roman Empire etc. In their short time on the pages of history, they left a huge imprint; not only in history but they left a huge footprint on the earth as well. Walk with us to look over the crumbling buildings of this once powerful empire.

We depart this once thriving place and meet our friend who will take us past that annoying sign that says ‘Verboten’ on our way to the bunker complex codenamed “KORALLE” (it means Coral) that was the headquarters of Großadmiral Karl Dönitz.

This excellent chart, prepared by our friend Herr Holz, will help you follow our progress through this forbidden place.

We depart the ruins of the Soviet built (post-war) Kampfgrüppe and head for Koralle and the bunker complex there. On the way however, we pass this man-made lake. This was one of six such man-made lakes around the HQ of Dönitz and they served several useful purposes. First and foremost, from the air this entire compound looked like a farm with houses, barns and lakes, worth nothing as a target. In case of fire, water from the lakes would be used for the firefighting. In the background, we see the ruins of the HQ of the Soviet Kampfgrüppe.

Okay – onward to Koralle and the headquarters of the Kriegsmarine Großadmiral Karl Dönitz, not far on foot from here. You will note that the bunkers are blown up and there is heavy use of cinder blocks here too, and you will wonder who blew these bunkers up and why the use of cinder blocks.

This construction with concrete blocks were house-like structures built by the Soviets after the war. This was to train their military in the art of urban warfare …in the event of civil unrest. Unsettling thought, isn’t it? Doesn’t COOPER ever smile?

We now go in, on and around the massive bunker system that was Koralle – the headquarters of the Kriegsmarine. We note that these bunkers are all demolished, but by whom? It definitely was not by Allied bombing and it was not by German forces at the time of the surrender.
There was an agreement of sorts between the victorious Allied powers that they could use the standing buildings, bunkers etc. of the Reich but when they were no longer needed, the occupying force would destroy them and so, with the evaporation of the Soviet Union and all her puppet nations and the withdrawal of the troops, all the above ground bunker systems used by Soviet forces were blown up with one exception. They were unaware of the Army bunker complex in what is now Poland, not far from the Wolfsschanze and so it stands today, undisturbed. Koralle, on the other hand, is blown up. Come with us now as we go through this very important place of history.

Air Raid Bunker of Großadmiral Karl Dönitz – What have we here? Up this weed-covered path and stairs, under a metal sheet we find a hatch with a ladder leading down.

We have arrived! This is not the main entrance to the underground bunker but rather this is the escape hatch for that bunker. The main entrance is closed and blocked, and is not useable. Join us as we venture deep into the earth in the security bunker of Großadmiral Karl Dönitz.

COOPER strapped on his miner’s light and was the first guy down the hatch.

All hands made it safely back into the light of day, and now we go to the home of Großadmiral Karl Dönitz.

Berlin Patrol 2012
Friday, 7 September
Off to Poland …well, it is Poland today. Until 1945 this was part of Germany but borders were re-drawn. With the European Union, we do not even need to show our passports at the border as we did in past years. 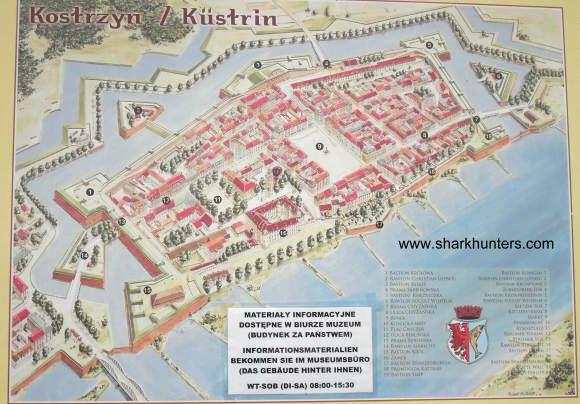 Overview of the ancient town of Küstrin