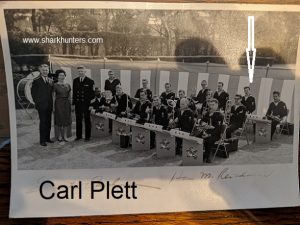 CARL PLETT, Member #7770-2014 joined the US Navy on 21 July 1961 and in boot camp was the Recruit Chief Petty officer of the Drum and Bugle corps.  He was then posted to the Naval School of Music where he served as Music Theory Instructor, teaching three classes until July 1962 when he was assigned to the ComSeventhFleet Band. He was then posted aboard USS PROVIDENCE which was homeported in Yokosuka, Japan.  After eighteen months aboard, he was posted to the Naval Training Center in San Diego.  His rank was E5, MU2.  on 20 July 1967, he was honorably discharged from the Navy.