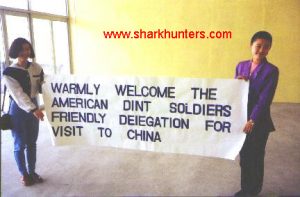 After arriving in Beijing, there was a Welcome Ceremony just for us. There were flowers and speeches by Naval officers. During the afternoon, we visited the Temple of Heaven and in the evening, we enjoyed our Welcome reception with officers of the Chinese Navy. 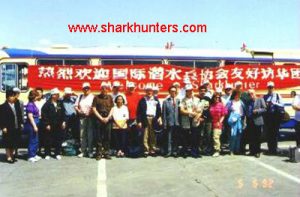 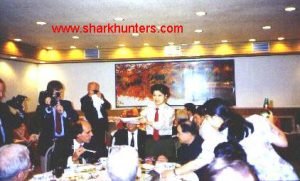 Naturally, we visited the Great Wall and those who made it to the first redoubt were awarded a “Hero’s Certificate” to prove that we made this difficult climb. After lunch, we toured the eerie Ming Tombs. 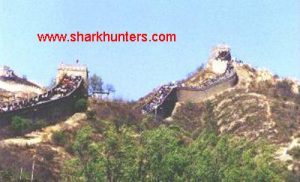 Yep, we climbed all the way from here …to WAY up there!

In the next days, we visited the Summer Palace and saw the giant pandas in the Beijing Zoo. The evening show of the Chinese acrobats was absolutely breathtaking! Naturally, we visited Tiananmen Square and toured inside the massive maze-like Forbidden City. 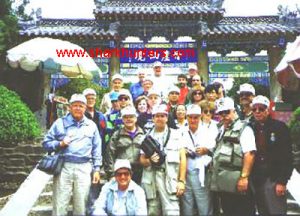 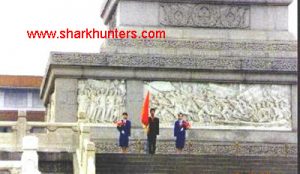 In Tiananmen Square Inside the Forbidden City

We visited the Air Force Museum from the time of World War II with many P-51 MUSTANG fighters as well as some very strange-looking planes copied (sort of) from the US Air Force. 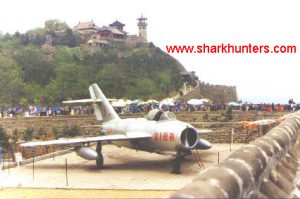 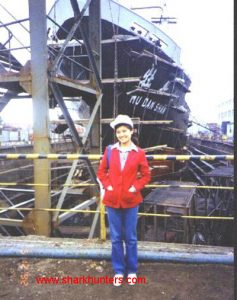 A Chinese MiG 15 at the Museum Our beautiful guide Anna at the shipyards.
In Dalian, we visited a shipyard that builds Navy ships and then we departed for our journey across the Yellow Sea by ship, to Yantai. It was most interesting. 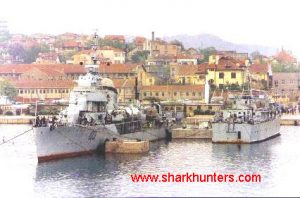 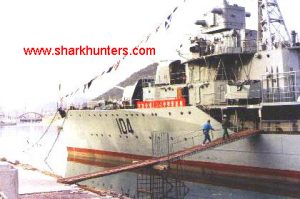 Two to a cabin, many gathered for fellowship We ate well on this tour – lots of food!

In Yantai, we just enjoyed the beautiful sights of China including our cruise to Liu Gung Island. We then went to Penglai for a city tour including the fisherman’s market and of course, a walk on the beach.

While it was not part of our planned tour, two of us found a destroyer and went aboard, with the video cam running. We took a lot of tape in the Silkworm Missile batteries, in the various gun tubs and other gunnery emplacements, all through the bridge AND through the CIC. It was when we entered the Officer’s wardroom with the camera running – and came face to face with a four-stripe Captain and a one-star Admiral that things got exciting. They wondered what two Americans were doing on their ship – and with a video camera.

After we gave the Admiral a SHARKHUNTERS cap, we were all friends and our group was given a tour of the ship by the Captain and the Admiral. 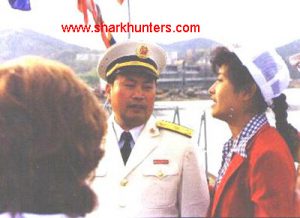 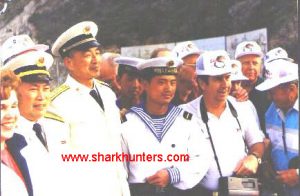 Our special destroyer tour The Admiral, Captain and our group aboard.

China is the only country to still build steam locomotives, so we rode the overnight train to Tsing Dao. We could not pass up a tour of the famous Tsing Dao brewery, and the Director of the brewery and his staff welcomed us and spent an hour or so with us – doing what else? Drinking Tsing Dao beer. We visited the Navy Museum, saw the submarines at Laoshan and the Submarine Academy. We visited Small Tsing Dao Island where many couples walked in their wedding finery, to take their marriage vows later that day.

On our return to Shanghai, we rode the Admiral’s own barge up the Huang Pu River to the Wusun Navy Base. We have refreshments on the boat ride, but most of our group was topside, taking photos and videos. We were welcomed at the East (Yellow) Sea HQ by Captain Victory Wu. He and his Flotilla Commanders took our group on personal tours of the ships in the base. We were treated royally! Later we had a friendly seminar during which Captain Wu answered our questions – except the one about how production was coming on the aircraft carrier the Chinese Navy was building in secret. One of our group was from Jane’s Fighting Ships. We had a splendid meal with the Captain and his staff, and everyone received a certificate that celebrated our visit to the Headquarters of the East Sea Navy. 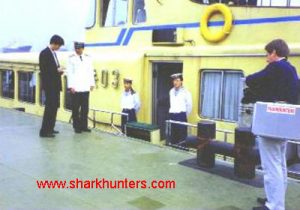 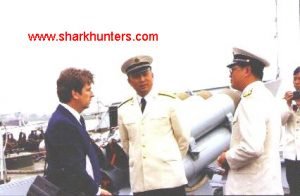 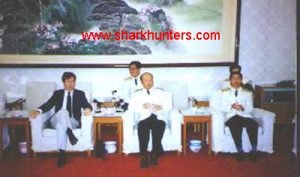