Ours was the first tour into the former Soviet Union, and we were guests of the Russian Navy and specifically of Fleet Admiral Vladimir Chernavin, former CNO of the Soviet Navy and SHARKHUNTERS Member. 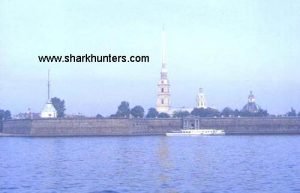 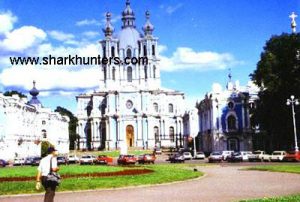 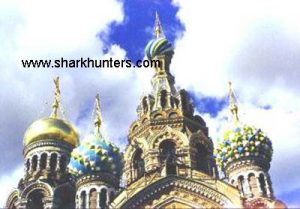 When our SHARKHUNTERS Group arrived in St. Petersburg as guests of the Russian Navy, we were the first such group EVER in the former Soviet Union. In St. Petersburg, we stayed in the lush villa owned by the Russian Navy complete with sauna, swimming pool and billiards – and they kept our room refrigerators well stocked with beer and Pepsi. Everywhere we went, we rode in Navy busses and with a Russian Navy escort. 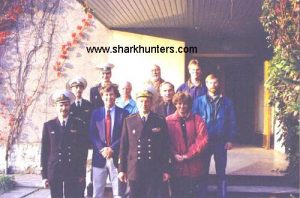 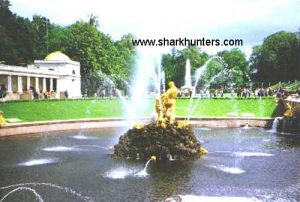 We visited many of the magnificent palaces in St. Petersburg, including Paulusk, home of Czar Paul – until his wife and son killed him. Not many Czars died of old age. Outside Paulusk, a band was playing American music, just for our group.

Naturally, we visited the palace Pushkin. One of the most magnificent palaces in the world, this was the main palace of the Czars. It is about six blocks long and each room more magnificent than the one before. We were there during another historic first – a man dressed as Peter the Great rode a beautiful white horse in the palace courtyard while ladies dressed in the fashions of that time lounged on the veranda. It is impossible to describe the opulence of this palace – gold furnishings, crystal chandeliers with pure gold melted into the glass to form the bangles. It is all on the videotape we shot.

We visited the Russian Navy Museum, where we were met by a group of Russian submarine veterans. On our return to the villa, we were interviewed by various press groups, including Isvestia and Tass with the UP and API.

After dinner, we were guests at the ballet, and our box was less than two feet from the stage. The story was about a married prince with a secret girlfriend – a lot like American soap operas.

We toured the Admiralty (Naval Headquarters) and visited the (then) Chief of the Leningradski Naval District, SHARKHUNTERS Member Rear Admiral VLADIMIR GRISHANOV (2533-1992). From this HQ, we toured the Russian Naval Academy as guest of SHARKHUNTERS Member Admiral VITALI IVANOV (2530-1992), Director of the Academy. We toured the classrooms, the simulator labs and watched cadets work on battle simulators. We spent the evening at the world-renowned Marinski Theater with another ballet. This is the stage on which Rudolf Nureyev performed for years before coming to the United States. We enjoyed Swan Lake. 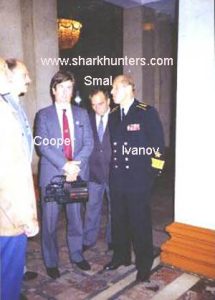 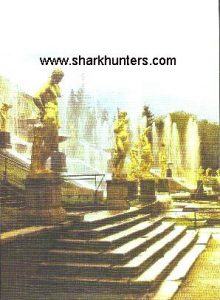 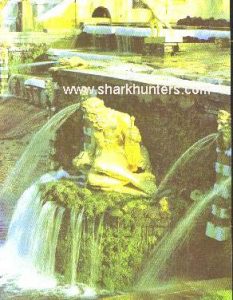 Harry Cooper with Admiral The gold fountains at Petroveredts – yes, they are real gold!
Ivanov at the Ballet

Naturally, we visited the cruiser AURORA in the Neva River. It was from this cruiser that the shot was fired to signal the beginning of the Bolshevik Revolution, and we were given a fantastic tour. Then we boarded the admiral’s personal boat for our ride down the Neva River and out into the Baltic and our tour of Petro Verde, the favorite palace of Peter the Great. No wonder – there are some 180 gold-plated fountains on the grounds along with other priceless pieces of art.

We also took the Admiral’s boat to Fortress Kronstadt and the training base for Russian sailors. There was a giant nuclear powered guided missile cruiser named Peter the Great under construction, while other, older ships, were awaiting the breaker’s torch. At this base, we had lunch in the Officer’s Club with the Base Commander and his staff then we toured a cadet training ship. A priest was dockside, blessing another training ship as it departed harbor – the first time since the evaporation of the Soviet Union that a priest was allowed to bless a Russian Navy ship – and we were there.

Naturally, while in St. Petersburg we visited famous places like the Hermitage, one of the largest and finest fine art museums in the world. Our Staff Cars took us to this former palace. It is estimated that if we took five seconds to view each and every piece of fine art in this museum and spent a full twenty-four per day, seven days per week …it would take ELEVEN YEARS to see it all! Sorry, we only had a few hours.

We also visited the Russian Artillery Museum, the Russian Museum and especially – the Russian Submarine Academy. The Deputy Chief of the Academy and four Captains took us on our tour of this impressive school, and that is all on the videotape as well. Our evening was consumed with a formal dinner, our last in this most magnificent of all cities. It was our last night in St. Petersburg.

Next morning, we departed in Navy staff cars for a secret Russian Air Force base to the north of the city. There sat the personal plane of Admiral VLADIMIR EGOROV (2535-1992), Chief of the Russian Baltic Sea Fleet and SHARKHUNTERS Member, waiting to take us to our next destination – Kaliningrad and Baltysk (Königsberg and Pillau).

There we were met by Rear Admiral and SHARKHUNTERS Member VALERI BOBROVSKY (2540-1992), First Deputy Chief of the HQ of the Baltic Sea Fleet. The translator, a Captain, got rather brisk when he spotted me videotaping the fighter and bomber squadrons there on the pad. This is on our videotape. This is a closed city – off limits to all, including Russian citizens. Special permission is required to even enter the city. 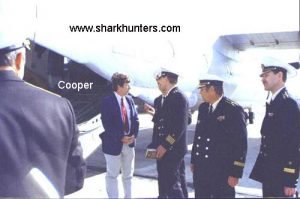 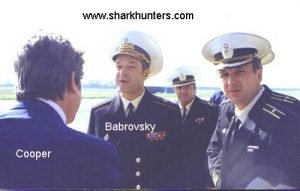 Our arrival in Kaliningrad/Königsberg Harry Cooper, RADM Bobrovsky, and the Captain who just realized that I had videotaped the jet
fighter and bomber squadrons

After getting settled into our rooms in another Russian Navy villa, we were met by Vice Admiral VALERI GRISHANOV (2537-1992), Chief of the Russian Baltic Sea Fleet. He is also a SHARKHUNTERS Member and if his last name looks familiar, his younger brother was the Commander of the Leningradski Naval District. We toured several ships including a frigate named DRUZHNY (it means Friendly), a strange name for a warship. 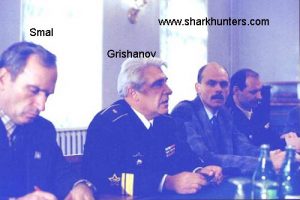 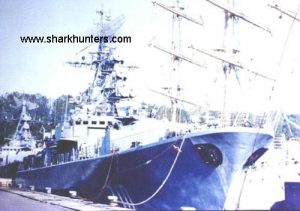 Our meeting with Vice Admiral Grishanov The ‘friendly‘ frigate DRUZHNY

In the evening, we enjoyed another banquet at the villa with the Vice Admiral, two Rear Admirals, and many Russian officers. Sadly, these banquets mean that we are departing in the morning, and so it was here.

The aircrew put aboard plenty of beer, wine, water, bread, sliced apples and of course – vodka! This particular vodka was so strong that even the Russians had to mix it with water. On to Moscow!

We got settled into our rooms in a hotel that had previously been the accommodations for delegations from the various Soviet states when they were in Moscow – pretty nice! We toured the Moscow Admiralty as guests of Admiral FELIX GROMOV (2542-1992), Chief of Naval Administration and SHARKHUNTERS Member. He was our personal host and guide. Another evening of culture here in the ‘homeland‘ of ballet.

We toured the famed Red Army Museum, where we saw the Regimental Standards of the German Armies lying on the floor, in a very secure glass case. The standards of the Gross Deutschland, the Viking, and the Das Reich Divisions were at the top, and on the very top of the pile was the standard of the Leibstandart Adolf Hitler. It was a moving historical moment for our group. We also saw the actual telephone and fender flags of Field Marshall von Paulus and the crystal globe that sat on his desk. This globe showed only three countries on it – Germany, Japan, and Italy. Very interesting.

At our hotel, we were joined by Fleet Admiral VLADIMIR CHERNAVIN (2240-1992), just retired as Chief of Naval Operations of the Russian Navy and previously, of the Soviet Navy. We enjoyed a two-hour chat session with him. He was happy and at ease – obviously happy that his burden of running the second largest navy in the world was no longer on his shoulders.

Our final meeting was with our friend Major General PYOTR (PETER) BARABOLYA (1936-1991), Member of SHARKHUNTERS and the only Major General in the Soviet Navy. It is all on our tape of our 1992 tour to Russia.

If you are wondering who is the guy in so many photos, such as the one with Chernavin above, that is our friend and SHARKHUNTERS Member, Anatoliy Smal. He was Chief of Intelligence for the Soviet Navy. Both Anatoliy and Chernavin are Sharkhunters Members.