Our SHARKHUNTERS History Tour took us to this beautiful country where we actually rode a DAPHNE Class submarine, flew an ASW patrol on a low-level C-47 DAKOTA, flew in a Super Frelon chopper, lunched with the Commanding Admiral of the South African Navy and his Staff, met with General Groenwald for an intelligence update on the troubles in the country. We were at the Officer’s Academy, Naval Boot Camp and several old British-type gentlemen’s club complete with bagpiper. We ended our tour with a bush flight into Krüger National Park where we stayed four days and went on photo safari several times each day. The scenery is breathtaking. 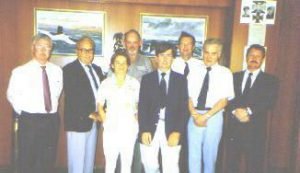