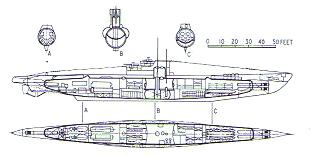 The Type VII-B was slightly enlarged over the initial variant and the saddle tanks were modified to improve seaworthiness as well as extend bunker capacity and range.  More powerful were installed for greater surface speed.

The Type VII-B boat carried twelve torpedoes or fourteen mines
*  Crew complement varied up to perhaps 60 depending on the mission.
**  Deck guns were removed later in the war.
***  Later increased to two individual 20mm plus a single 37mm automatic guns.

History of the German Submarine U-48 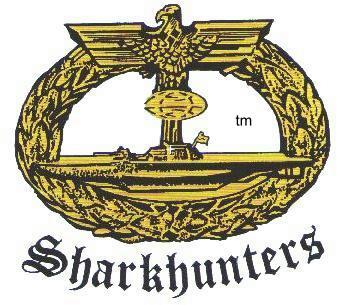 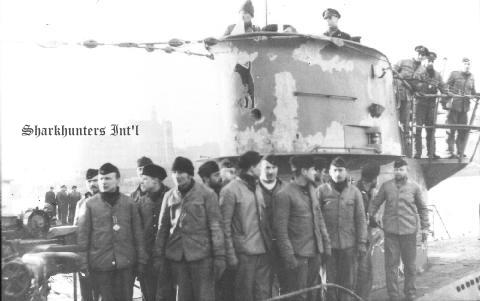 The wear and tear of war is evident in the conning tower badly in need of repainting.

Under three different Skippers, U-48 became the MOST successful submarine of any navy in World War II.  It is generally accepted that the I.W.O. (First Watchkeeping Officer) Reinhard “Teddy” Suhren did much of the shooting.  In fact, when Heinrich Bleichrodt was going to be decorated with his Knights Cross, he said that he would refuse it unless Suhren was also decorated with the Knights Cross.

Commanders of U-48 include:

U-48 was initially attached to the U-Flottille Wegener then to the 7th U-Bootflottille based at St. Nazaire, France.  She was transferred to the 26th U-Bootflottille based at Pillau as a Schulboot (school boat) and used there for training until March 1942.  U-48 was then transferred to the 3rd ULD (U-Boot Lehr Division or submarine training division).  At the end of the war, she was scuttled by her own crew.

SHIPS SUNK BY U-48 (SCHULTZE commanding):

+  The Captain of the American liner PRESIDENT HARDING radioed that he had rescued the entire crew of 36 from HERONSPOOL.  Captain Batson, Master of HERONSPOOL said that at 6 o’clock Friday evening he saw the EMILE MIGUET being shelled about six miles distant, so he steered his ship away to the north eastward.  About 8 o’clock they heard an explosion and saw a column of water rise on the starboard beam.  Half an hour later the submarine approached and signaled ‘What ship?”
“As soon as we could make him out,” Captain Batson said, “we fired two shots at him whereupon he dived.  I hauled to the westward for two hours then zig-zagged.  About 11pm the submarine appeared in sight nearly aft.  We quickly fired two shots at him in succession.  He disappeared but reappeared at midnight and fired a shot which exploded close to our starboard beam.  Then we sighted him on the starboard quarter and again we fired.”
After a while the submarine submerged again but soon there was a violent explosion in the forepart of the HERONSPOOL.  She had been torpedoed.  Captain Batson continues, “We then abandoned ship in two lifeboats and after pulling away for some diistance, we lay to.  We saw that the forepart of the ship appeared to have been blown away and that she was listing to port.  The submarine appeared in full view a short distance away 20 minutes later but seemed not to notice us.  We sighted PRESIDENT HARDING about 5:30am and shortly after that HERONSPOOL disappeared”

*  As one might imagine. firing into a convoy such as this attack on Convoy HX.115, is a chaotic thing.  U-48 reported two different ships hit, but her torpedoes actually missed them and hit two other ships.  They thought they had sunk ATHELPRINCEbut she was not even hit.  They did hit and sink EASTLEA but they erroneously reported her as MASUNDA.

SHIPS SUNK BY U-48 (RÖSING commanding):

SHIPS DAMAGED BY U-48 (RÖSING commanding):

SHIPS SUNK BY U-48 (Bleichrodt commanding):

SHIPS DAMAGED BY U-48 (Bleichrodt commanding)

****  EMPIRE SOLDIER swerved to avoid torpedo from U-48 and hit another ship causing minor damage.

U-48 was scuttled by her own crew off Neustadt Bay while under command of Todenhagen in the unofficial Operation Regenbogen (Rainbow) against orders from Großadmiral Karl Dönitz.  Sometime between 1947 and 1953 she was raised by the Allies and broken up.

History of the German Submarine U-96

One of the MOST Famous Submarines of World War II

Commanders of U-96 include:

U-96 undertook 11 Feindfahrten (War Patrols), mostly in the North Atlantic.  In November 1941, she was ordered into the Mediterranean and stopped in the harbor at Vigo, Spain to replenish fuel and supplies from the ‘interned’ German supply ship BESSEL on the night of 27/28 November.  She attempted the break-through the night of 30 November/1 December 1941 but was so badly damaged that she had to withdraw back to St. Nazaire for repairs.  Over February and March 1942 she operated for one Feindfahrt off Nova Scotia and New England.

If this war history and the emblem appear familiar, this was part of the plot for the excellent movie “Das Boot” because during one patrol, LEHMANN-WILLEMBROCK had a PK (Propaganda Kompanie) sketch artist/photographer aboard named Lothar-Günther Buchheim!  He was to later become the author of the book turned movie “Das Boot” and to be quite frank, pretty well hated by most surviving U-Bootfahrer.

SHIPS SUNK BY U-96 (LEHMANN-WILLENBROCH commanding)

(1)  OROPESA was still afloat two and a half hours after the initial attack, so she was finally sunk by a coup d’grace shot.
(2)  ALEMEDA STAR evaded three separate attacks by U-96 before finally being hit and even then, it took three more torpedoes to sink her.

(5)  U-96 fired one torpedo each at the armed merchant cruiser HMS CATHAY and the yacht HMS CHALLENGER in a group escorted by three destroyers.  Both torpedoes missed their intended target and hit ANSELM, sinking her.

(6)  This ship LAKE OSWEGA was built in 1918, owned and operated by Ford Motor Company and her master was Karl Prinz.  Her armament consisted of two 3” guns and she carried 2,398 tons of general cargo. She was bound from New York to Iceland by way of Halifax. U-96 had sunk EMPIRE SEA some hours earlier and then went after this zigzagging freighter. One torpedo hit this old ship amidships, breaking her in two, and she sank quickly.  The log of U-96 indicates that three lifeboats were launched, but none of the eight officers, twenty-two men and seven Armed Guards was ever found.

SHIPS DAMAGED BY U-96 (LEHMANN-WILLENBROCH commanding)

SHIPS SUNK BY U-96 (Hellriegel commanding):

(7)  BELAES was sunk by gunfire from the deck gun.

SHIPS DAMAGED BY U-96 (Hellriegel commanding)

(8)  This damaged tanker continued in convoy all the way to St. Johns where she arrived on 19 September.