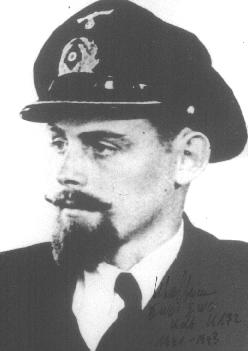 HERMANN HOFFMANNinitially was I.W.O. aboard U-172, a very successful boat under command of CARL EMMERMANN (315-1987)and when that boat was in Capetown Harbour, it was HERMANN who took the famous photos of Table Mountain through the periscope of U-172. HERMANN . was an avid photographer, which possibly proved the undoing of him and his boat. When he was with us during our South African “Patrol“, HERMANN always had at least two cameras slung around his neck, sometimes three …he was always taking photographs. 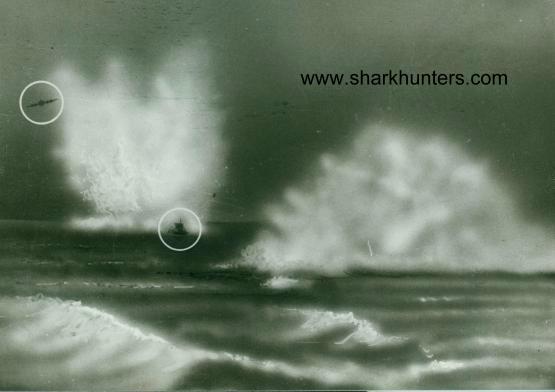 The photo directly above tells quite a story. When HERMANN gave us this photo he explained that he took this shot and others – during the American attack that sank his boat! The circle upper left is an attacking airplane and the circle lower center is an American destroyer escort – both attacking U-172. The eruption in the center of the photo is a shell splash from the American DE. We asked HERMANN that, while his boat was under attack by a superior enemy force, shouldn’t he have been doing something to save his boat rather than taking photos? We do appreciate this one of a kind photo and all the others HERMANN gave us.

HERMANN was with us in Chicago during one of our patrols and one afternoon, we had all the veterans at one side of a table to hand sign a photo or a book that each of our Members brought. One character, Dennis Schulze, plunked a huge boxful of books at the end of the table, expecting the veterans to sign them all. With the black oak cane he always had with him, HERMANN banged on the table and said that he knew Dennis was not going to have these books for his collection but that he was going to sell them – then HERMANN told all the veterans that Dennis must pay for each signature in each book the veterans. We threw Dennis out.

Any time we needed to quiet a room so the speaker could be heard, we could always count on HERMANN slamming that black oak cane on the table, demanding silence. It always worked. HERMANN was an interesting guy – a good friend and a great Member.