As they patrolled off the coast of Korea, they noticed unusually heavy Japanese patrol boat activities off Quelpart Harbor. STREET decided to investigate. They easily slipped past the patrol boats and found a very large tanker. They fired torpedoes at her and when they hit, the tanker erupted in a gigantic “V” shaped sheet of white flame that shot high in the night sky. Two escorts headed for TIRANTE – so they sank them as well. As STREET headed TIRANTE out of the area and into the welcome darkness, two Japanese patrol boats were coming, looking for the American intruder. STREET ordered all guns manned and trained on the bridge of the patrol boats in case they were spotted, but it was dark and they were far enough apart …TIRANTE slipped out into the open sea.

On 14 April 1945, Commander GEORGE STREET was awarded the Medal of Honor, the highest honor the United States can bestow and his Executive Officer, Lt. Cdr. EDWARD (NED) BEACH (1163-1989) was awarded the Navy Cross.

STREET was also a strong, supportive Member of Sharkhunters and he hand signed our very rare fine art prints. Click on the print to see the complete descriptions. 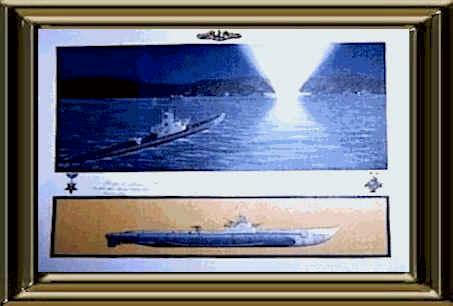