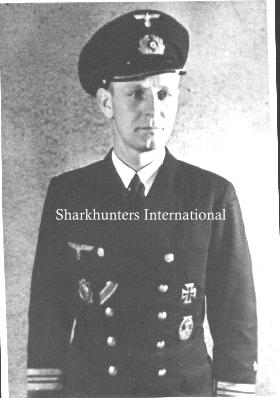 In the early stages of the war, FEHLER was the Demolitions Officer aboard Schiff 16, also known as the raider ATLANTIS. It was an ongoing joke that, no matter what his assignment, FEHLER always wanted to blow something up. He was a delightful man and Sharkhunters President HARRY COOPER (1-1983) spent a day with him in his Hamburg home listening to some great history.

After ATLANTIS was discovered by the Royal Navy in the South Atlantic and the ship scuttled, it was FEHLER buzzing back and forth in his motor-lifeboat that carried food from the various U-Boats to the men in the string of lifeboats being towed back from the South Atlantic to the German base on the French coast. 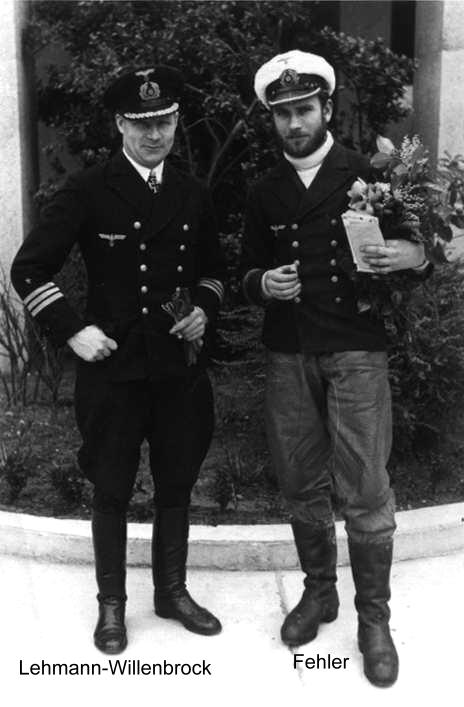 FEHLER is here with his Flotillenchef, another Sharkhunters Member HEINRICH LEHMANN-WILLENBROCK (120-1985). One might wonder why a raider officer is in a U-Bootflottille. In the closing moments of the war, the Type X-B mine-laying U-Boat U-234 was modified to carry cargo to Japan, and this was FEHLER‘s boat. The boat had 560 kilos of uranium for the Japanese atomic bomb program, two Me 262 jet fighters in crates with the technological data for the Japanese to begin to mass produce them for the Japanese Air Force, a Naval Fleet Judge (Kai Nesling) to prosecute the spies in the German Embassy in Tokyo, the new head of the Luftwaffe detachment in Japan (General Ulrich Kessler) and his staff, two Japanese officers and a host of other high-tech equipment that the German OKW (Military High Command) hoped would help the Japanese mount such a massive counterattack against the American Fleet that the USA would have to pull its forces out of Europe to concentrate on Japan thereby allowing Germany to regroup or at least sue for a negotiated peace.

Sharkhunters Founder and President HARRY COOPER (1-LIFE-1983) visited Captain FEHLER in his home in Hamburg for a day, where he learned about FEHLER‘s part in the rescue of the men from the raider ATLANTIS where FEHLER was the Demolitions Officer and other parts of his time in the Kriegsmarine including his one and only patrol as Skipper of a U-Boat …that being U-234 heading to Japan with a highly special cargo at the end of the war.